Smoker studied and performed both jazz and classical music while growing up in Davenport, Iowa, and graduated with a doctorate in music from the University of Iowa in 1974. As a trumpeter his influences include avant garde classical sources as well as the jazz trumpet tradition and also the saxophonists John Coltrane and Anthony Braxton. He taught jazz studies and contemporary music at Coe College from 1976 to 1990 and has also taught at the universities of Iowa, Northern Iowa, and Wisconsin-Oshkosh. In the fall of 1990 he moved to upstate New York and now concentrates on composing and performing, while accepting a few private students. 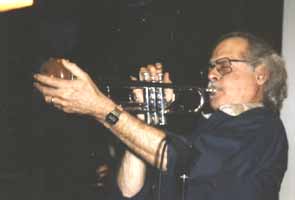 Smoker appears on Anthony Braxton's Ensemble (Victoriaville) 1988 and Charlie Parker Project 1993 CD's. Braxton was featured on the first Smoker Trio recording, QB. In addition to the trio and his brass group, he has recorded with the Smoker/Golia Quartet, Joint Venture, Haynes'4 Horns & What? and Hammond Insurgency, the Gregg Bendian Project, Damon Short, Randy McKean, et al. He as appeared with a wide diversity of other jazz artists over the years-including Dodo Marmarosa, Art Pepper, Frank Rosolino, David Liebman, Doc Severinsen, George Lewis, Peter Brötzman Lee Konitz, David Sanborn, Gerry Hemingway, Marilyn Crispell, and Evan Parker. Smoker's recordings and style are discussed in various discographies, encyclopedias, and text books. He was first elected to the annual Downbeat Critics' Poll in 1986, and has been the subject of feature articles in Downbeat, Jazziz, Coda, Cadence, and other news media.

"Paul Smoker's music is definitely f rom the heart. It is energetic and intense, like the people who make it. But at the same time there is a quiet, gentle side like the muddy Missippi River where Smoker spent his childhood, or the rolling, green fields of Iowa in July. Paul has taken all of the world around him and put it into his trumpet. The result is some of the most expressive, personal, and original music heard anywhere." - Coda

"The parallels between Smoker and Bix Beiderbecke are numerous ... both utilize jazz and classical styles to shape their music and play in the most contemporary jazz format available." -Quad City Times

"Smoker.. is a wonder, offering a style that boasts traditional trumpet virtues-a full but malleable sound, along with a powerful, swaggering swing-and an insatiable need for venturesome experimentation. His trio ... breathes this demanding music at a level of superconsciousness; they're tighter than spandex." - Chicago Reader

"Smoker is a player who works the outside edges of music-a place where young lions fear to tread." JAZZIZ

"'Composition 63' brought out the full chamber orchestra in support of soloists Heffley and trumpeter Paul Smoker (who played fantastically)." -Downbeat

That was an amazing display of technique, first of all. There's alot of confidence in his playing. This reminds me of things going on in Europe where a lot of classical musicians were into the freedom forms of jazz as it was called. Classical pianists got into it because found it hard to play "One O'Clockjump," but they could really buzz and smoke on technically demanding things. Free thought allowed them to create their own changes pretty much when they wanted to, though this is based on the beginning and end of "Caravan," To rate this technically everybody the drummer included, has a lot of chops, and I feel, sometimes you have to rate things higher because of what the artist was saying and wanting to do, I give it 4 stars, I had terrific admiration for what was played rather than, any great love for it, These guys obviously love the direction they're taking, and I respect that. I enjoyed listening to it. I'll tell you what, he was really pumping those valves and, has an extremely good double tongue technique

Back to Paul Smoker's Main Page

Back to Gerry Hemingway's Quartet Page