Point of Departure by William Shoemaker

Gerry Hemingway: On the Road, on the Net

Interviewing a musician on tour can be daunting: often, five or ten minutes in a dressing room or a hotel lobby is all a journalist can get. Usually, the musician is exhausted, so any question more complex than "Who are your influences?" may prove to be excruciatingly difficult to answer. It can be frustrating for all parties. 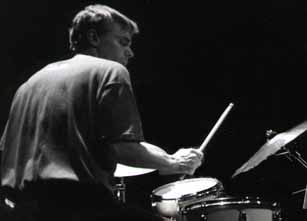 Percussionist-composer Gerry Hemingway, however, can pack a lot of information into a ten-minute interview ... if you can catch him. Hemingway is a classic road warrior, criss-crossing North America, Europe, and Japan several times a year with his own Quartet, co-op bands like BassDrumBone (with Ray Anderson and Mark Helias), and Say No More (with Mark Dresser, Phil Minton and Bob Ostertag), anchoring bands like Frank Gratkowski,s trio, and producing concerts of his chamber music.

Luckily, Hemingway is one of an increasing number of musicians connected to the Internet. His well-designed Website -- http://www.gerryhemingway.com -- is loaded with information and links to other cool sites. He is also a hard core e-mailer, who books his North American tours, makes travel arrangements, etc., on line. So, to bypass the shortcomings of the proverbial ten-minute interview, it was suggested to Hemingway that an e-mail interview might prove interesting. He was game. Over a two-month period, questions and answers shot through cyberspace; Hemingway's last response was posted shortly after his performance at the 1998 Tampere Jazz Happening (Finland) with Robert Dick's Jazz Standards from Mars project. 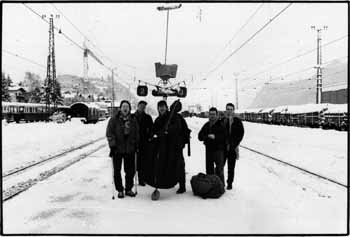 Bill Shoemaker: You had a long-standing band with Michael Moore et al that really allowed you to develop a trajectory of ideas over several years. There is something of a shift with the new quartet; there are some recognizable elements from your earlier work and some new elements, too. For you, what are the strains of continuity and changes in your compositions for the quartet? How much do the respective personalities of the musicians shape the work? And, as a player, you're dealing with old pals like Ray Anderson and Mark Dresser, and a new cohort in Ellery Eskelin; what are the challenges of such a chemistry?

Gerry Hemingway: The idea of the quartet was borne out of the success of the "Down to the Wire" tour which was to be a quintet tour but our cellist Ernst Reiseger slipped a disk a day before the first rehearsal so we had no way to really replace him. I hurriedly rearranged the pieces for the quartet instrumentation and by the end of the tour, I and the rest of the group were genuinely pleased with the openness of this configuration.

As the quintet's repertoire expanded and developed in the years that followed I had always in the back of my mind the itch to explore the quartet setting more. As I got more familiar with Ellery's gifts as an improviser, the notion of teaming him with Ray became an irresistible concept. I felt there would be a rich chemical reaction in combining their two sounds and energies. And that was encouraged by their enthusiasm in playing together. Nonetheless it took some gigs to sort out our collective sound and approach. My music has many passages that are densely intertwined with collective improvising and interpreting and it can take a minute to navigate the sometimes bumpy road to in mutually engaged music. 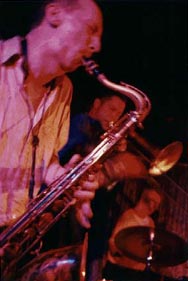 Despite the fact that I have played with Ray for a long time, and in many settings, this was the first time he was doing my music exclusively. My own band differ in substantial ways as far as content to BassDrumBone of we entered into a new phase of our relationship in the context of this tour. I think this situation is particularly suited to getting a big range of Ray's tremendous gifts on the trombone. And I think the more extended room for us to explore solo statements offered much mutual inspiration for each of us to reach a little deeper in the vault to see what could be created.

Some of the repertoire is new but most of the repertoire of the quartet is adapted from the Down to the Wire book and/or the unreleased quintet recording Waltzes, Two-Steps and other Matters of the Heart. I am happy with how the pieces have changed in this new context. Then again I always have been open to what happens when you put stuff up on the bandstand, sometimes taking the suggestions that come from accidents, practical frustrations, acoustics, egos and some burning blowage, to help from a more successful piece of music.

Shoemaker: A lot of what you are saying confirms my sense that percussionists bring unique qualities to the table as composer-bandleaders. I think it has to do with the intrinsic high-level listening required of a drummer; it gives them a clear read on how the ensemble chemistry is evolving. I think that's a reason you have been very successful at writing to your colleagues' strengths and personalities. At the same time, you experiment with structural features in your compositions and pursue materials that reflect interests you would be pursuing no matter who was in the band. I like what I hear as a resulting combination of these two strands in your pieces, something of a combination of familiarity and, for lack of a better work, strangeness . By familiarity, I mean a recognizable GH voice, particularly in the thematic materials; by strangeness, I mean seemingly open-ended or process-oriented sections of the work that probably changes markedly from night to night. Is this a balance you consciously try to deal with?

Hemingway: Well, when I think of the continuum of drummers and their listening abilities, high-level listening is not the first quality that leaps to my mind. Producing the musical material that gives a ground is not necessarily an interactive experience, except perhaps with the rhythm section. Often most of the band tries to get with the feel the drums produce, at least that's what I have observed with those who have played with Elvin or Buhaina, not the other way around. But there are many, myself included who listen and respond with a commitment to making an ensemble music, where what counts is a balance of initiation and reaction. And certainly to that point, I have an agenda, as a composer, to seek an integration of my sonic imagination and the unique way someone I am working with states a left turn.

In the many years the quintet has been contending with my penmanship, there has been a natural give and take that comes with the process of crafting a successful performance. Ultimately I make most of the decisions that affect the orchestration, the timing of events, the dynamics and so forth. The flow and shape of the improvised material is mostly dictated by the notated material which is inherently responsible for establishing a musical context for musical invention. Process in the sense of what we fondly refer to as blowage (improvisation), is not what I would call open ended, as far as the quintet repertoire is concerned. Nor is it strictly codified either as Ellington was want to do. Somewhere in-between, is where, for me, the tension remains that keeps things both in and out of control simultaneously.

The quartet is by my design a more open ended bargain, though after forty gigs I noticed a kind of classicism emerging in the "open" sections. I guess I must accept that my writing has this tendency built in, or perhaps the players I choose have compositional leanings. But my direction with the quartet is decidedly in favor of the soloist having more control over the musical outcome. Here the unexpected is more welcome. The challenge for me as a composer is to make the platform for playing flexible enough to support a higher degree of chaos while sustaining musical coherence and form.

Shoemaker: I have a sense of what you mean by "a kind of classicism" in the open sections of your pieces. To my ear, Ellery is a very classical player, if you accept the Webster-Shepp trajectory as such; however, mine is surely a minority view among US critics. But, since classicism is now a hot-button topic in the US, I would be interested in hearing you expand  on your perception of, and/or criteria for, classicism in the jazz tradition, and how you hear that manifested in the work of you and cohorts.

Hemingway: My meaning of "classicism" in the way I just used it means only that there is tendency to formalize improvised expositions, often because their context is not one of limitless options. The music I write sets up clear initiatives for the players for the most part. Even the quartet repertoire, which as I said before is more open than that of the quintet, when played night after night tends to find it's "groove", by which I mean, successful excursions from the material are accumulated, combined and refined into shapes that work well with the given musical structure. 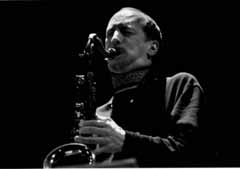 It's interesting that you find Ellery to have classical tendencies in that his sound has references we can identify within the trajectory you have brought up. Ellery comes from a family, particularly his mother, for whom jazz music was not just the choice of music on the record player but the central source of employment for his parents. So he really lived in a very "traditional" upbringing in jazz music of the 50s/60s and as he has developed his voice he has explored just about every other aspect of music making that he was only peripherally aware of in his earlier years. So he often struggles with his past roots and new found tendencies, which I feel create a very vital, searching and open minded music, one I obviously admire.

Can't say that open minded is the first thing I think of with the more hot button, "it don't mean a thing, if it ain't got that swing" crowd. Its really a pity that a "groove" must be so limited in it's definition. I just simply feel that music and life swings when there is a connection you can feel but you can't quite describe.

Bill Shoemaker's column, Point of Departure, is a regular feature of the Madrid-based Cuadernos de Jazz, the world,s leading Spanish language jazz magazine. A Spanish translation of this article appeared in the January/February 1999 issue. Copyright 1999 Bill Shoemaker, not to be reproduced in any format without the expressed permission of the author.

Back to Links Page