John Butcher lives in London and began playing saxophone professionally in the early 80s. He initially worked in jazz (inc. the 'BBC Award' winning Chris Burn Group's "Mingus Suite"), contemporary dance and music theatre At this time he was completing his research in Physics with a doctorate on the theoretical properties of charmed quarks.

Since leaving academia in 1982 he has worked almost exclusively in improvisation and 'new music'. His music ranges through free improvisation, various structurings, his own compositions (such as Funforall and no stops, only commas for Chris Burn's ENSEMBLE, and music for the Austrian group Polwechsel), multitracked pieces, work with pre-recorded tape, and also live electronics.

His first LP was Fonetiks (1985) - a duo with pianist Chris Burn, whom he continues to work with in many contexts. In 1984 he began another long term commitment - a trio with Phil Durrant and John Russell - later adding Radu Malfatti and Paul Lovens to form News from the Shed. In 1987 he began running the record label ACTA, which now has 14 releases.

Solo concerts have long been a particular enthusiasm and challenge. 2000/01 included performances in England, USA, Italy, Spain, Canada, Poland, Greece and France. He first recorded multitracked saxophones on Thirteen Friendly Numbers ('92) - receiving three Arts Council Bursaries to research this and multiphonic possibilities. His other solo CDs, London and Cologne ('96) and Fixations (14) (2001) focus on live performance. He was featured, performing solo, in the BBC TV series Date with an Artist.

A long standing interest in electronic music has led to a recent live electro-manipulations duo with Phil Durrant - CDs Secret Measures and Requests and Antisongs. 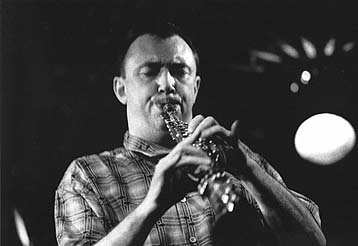 "In the world of saxophone music, players using extended techniques to make unusual sounds with the horn are common, but few have established a voice as original as John Butcher's. His saxophone acts as an extension of his own voice as he employs such techniques as growling and flutter tonguing to make his saxophone talk, sing, cry, whisper and laugh. What is more impressive is how he has incorporated all of this into a musical language that is both complicated and accessible. One of the central figures in Europe's avant-garde music scene."

The 43 year old saxophonist has developed a unique style which he has used to assert himself as one of the most original saxophone voices of the late 20th century.

John Butcher stands alone and still on the stage, holds his tenor saxophone, stares into space, takes a breath and begins to play. He holds a low note, and plays other notes over it at the same time, his cheeks puff out at odd intervals, the sign of circular breathing. His tenor makes a kind of talking sound, then two notes at the same time, then three. At the end there is enthusiastic applause and some cries of "bravo!" Utterly acoustic, it is perhaps the scariest and most challenging music of the symposium so far, and people have been starved for it."

"The silence during John Butcher's solo saxophone performance spoke volumes about its impact on the crowd. His succinct set was a harrowing display. Instead of a mere cache of technique, each piece presented a stripped down miniature of a particular area of his craft, from buzzing multiphonics to intense tonal manipulations and rigorous tremolos.

"John Butcher is currently the most radical saxophone experimenter on the planet."

"English saxophonist John Butcher long ago tossed out 90% of his instrument's conventional vocabulary and created a highly individual dialect from the sounds that were left. He's so developed his mastery of multiphonics that he can shift between grainy gargles and pure sculpted tones, and back again, within a single phrase. He's also an impressive manipulator of acoustic effects: the last time I saw him, he set up a pattern of overones whose dizzying psychoacoustic effects were in the same league as the electronic music os Marianne Amacher, Alvin Lucier and Ryoji Ikeda."

"Butcher is now quite simply one of the most effective free players in Europe: exact, unfussy and full of ideas."

"Thirteen Friendly Numbers is strong showcase for Butcher as both creative and masterful reed player and inventive strategist for free improvisation."

"London and Cologne is dynamic music that probably had the audience at these concerts sitting on the edge of their seats."

"John Butcher's solo was revelatory, his tenor an ensemble in itself - held aloft by circular breathing, the multiple trills and multiphonics added and subtracted strata from a twisting complex of voices with astounding control, interspersed with occasional lyrical irruptions."

"The sounds he can produce without electronic enhancement can be startling, an original voice."

"Butcher has found exactly those areas of the saxophone that correspond to post-tonal modernism."

Articles by Butcher include